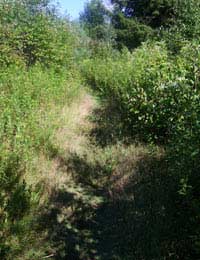 The most common way of establishing who owns land or for example a boundary fence is to look at the title deeds. Usually there will be a clear demarcation of who owns which part of the land and boundaries.

It is however sometimes possible for the original owners of land to lose their ownership due to another party's adverse possession of it.

What is 'adverse possession'?

Essentially adverse possession is where someone who is not the owner of land possesses (has sole use of) it.

Farmer A owns the Land X. Farmer B owns Land Y. Part of Land Y (owned by Farmer B) has been used solely by Farmer A for the last 20 years to park his caravan and he built a fence around it can only be accessed from his (Farmer A's land)

This land may be owned by Farmer B according to the title deeds, but Farmer A has had sole use and possession of it for a lengthy period. Ownership of the land has therefore transferred to Farmer A due to adverse possession.

When does adverse possession exist?

I have owned my property for over 25 years. There is an existing fence line put in when the plots were separated in the early 70s. The fence is concrete and wire. I've used and maintained the land and retaining wall to the right of these concrete posts for the past 25 years. Our neighbours now want to enforce the legal boundary and move it effectively further towards the right, claiming the land and wall we have been maintaining. Can they do this or have do I have rights under adverse possession?

The test for adverse possession (as confirmed by the House of Lords in J A Pye (oxford) Ltd v Graham) [2002]) is whether the trespasser has possessed the land for the requisite period.

The 'requisite period' is:

To show adverse possession, you must prove:

Factual possession is very dependent upon the circumstances of each individual case. However the court has offered the following guidance:

I have a four foot border at the side of my property and have exclusively used this as a flower bed for 27 years. New neighbours have moved in and have claimed that the strip is part of their property. They are demanding that it is returned to them. What can I do?

A claim can only be brought within 12 years of the right to claim existing*:

* There are slightly longer periods for government departments or spiritual organisations taking adverse possession, along with other specific but rare scenarios.

You must still prove the same criteria for adverse possession as above, but the relevant period for possession is shorter:

There are however a number of exceptions that prevent an application under the new regulations being made:

The process of making either of the above applications can be tricky, and your claim will be rejected if the forms are not completed correctly and relevant supporting evidence not provided. It is therefore recommended that you contact a lawyer if you are considering a claim for adverse possession; this is an extremely complex area of property law with plenty of exceptions, loopholes and technicalities!