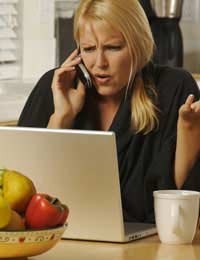 If you are living in rented accommodation and you are experiencing problems caused by neighbours, you still have the same rights of protection under the law as anybody else. Exactly who to contact about a problem if you were not able to resolve a dispute between you and a neighbour directly would very much depend on the type of issue and the kind of rented accommodation you live in.

For the most part, if you are renting privately and living in a self-contained dwelling, you’d deal with matters in much the same way as anybody else, either by contacting your local authority or, if there’s an imminent danger to yourself or somebody else, you may need to Contact The Police.

Renting from Your Local Authority or Private Housing Association

When you rent a property from your local authority or housing association, you will be asked to sign a tenancy agreement, which you need to adhere to. As well as this form, you’re likely to be given a handbook which contains details of what’s expected of you as a tenant and what you can expect from the local authority or housing association in return.

There may be specific instances where the handbook suggests you contact the housing association directly. This can differ between housing associations and can include things like informing them if a neighbour is wilfully damaging their own or somebody else’s property or is causing a regular nuisance.

Obviously, you’ll still be able to call upon the local authority or even the police in serious instances, but for specific types of nuisance behaviour, it may well be that it’s worthwhile informing the housing association as well. They can then investigate matters and can issue warnings about the threat of Possible Eviction if the situation warrants it.

For those living in shared accommodation who experience issues such as keeping shared areas tidy, your landlord or housing organisation might be the first place to go to in order to settle minor disputes you’re having. Usually, it’ll be the person who owns the establishment who will be able to take action to resolve any complaints you might have along these lines.

This type of situation tends to manifest itself more in places like student halls of residence, staff accommodation in hospitals or hotels, or hostels for temporary workers or the homeless. However, where a resolution cannot be reached after intervention, or the matter is more serious and falls outside of your landlord’s obligations, then once again, you should take your complaint to your local authority or to the police, whichever is the most appropriate.

The bottom line is that, no matter what your living circumstances are, each and every one of us have rights and the backing of the law to fall back on. So even if there may be some kind of internal complaints procedure in place, you should not hesitate to involve either the local authority or the police if you need to take the matter further or if there’s a sense of urgency or emergency.

Being Bullied by a Neighbour? What You Can Do

When you Should Contact your Local Environmental Health Department

When to Consider Legal Action