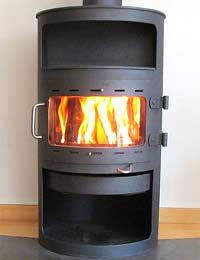 I have a neighbour who is insisting that we burn coal instead of dry seasoned wood in our stove. He claims that the smoke is getting into his house even though I have been over and could not smell anything. I had the chimney re-lined when we moved in 6 months ago. Where do I stand on this?

The law regarding this would very much depend on if you are living in a Smoke Control Area and if so, whether what you are burning is classed as an authorised fuel.

Back in 1956 and 1968, two separate Clean Air Acts were introduced to tackle the problems of smoke pollution caused by the widespread use of coal for domestic heating and in industrial premises and furnaces. As a result of these Acts, it gave permission to local authorities to designate Smoke Control Areas in which smoke emissions from domestic dwellings were banned.

Today, these Acts as well other associated clean air legislation have been pulled together and redrawn up into the Clean Air Act 1993.

Without knowing where you live and the fact that you have a close neighbour may mean that you are, in fact, living in a Smoke Control Area, unless you are residing in a fairly remote or rural area. If you aren’t subject to a Smoke Control Area, then the same restrictions do not apply, although it’s advisable to Contact Your local Environment Department to establish your legal position. It might also be the case that while you are allowed to burn dry seasoned wood, your stove or flue may not meet the required standards, so you should check that out too.

However, if you are living in a Smoke Control Area, then it is an offence to emit smoke from a chimney as a result of burning any ‘unauthorised fuel’, including wood, and you can only burn specified brands of manufactured ‘smokeless fuels’.

These are fuels which have been stringently tested to demonstrate that they are capable of burning without producing smoke in an open fireplace.

There are also ‘exempt appliances’ whereby the appliance generally has a smoke chamber which burns off the smoke before it reaches the chimney, allowing you to burn traditional coal and wood that would otherwise be banned under normal circumstances in a Smoke Control area, but you need to ensure your stove is one of those which is exempt.

You can visit the UK Smoke Control Areas website and find out if your borough or district council is completely or partially smoked controlled or if there is no smoke control area in place whatsoever. This site will also give you a list of the authorised fuels you’re permitted to use in a Smoke Control Area.

If, on the other hand, you’re unsure whether you live in an area covered by the legislation, then check with the local authority as you can be liable for a fine of up to £1,000 if you are found to be breaking the law.