Quiz: Are You a Good Neighbour? 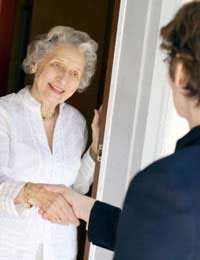 We all like to think that we are really good neighbours, but in reality some people are just better at being neighbourly than others. Being a good neighbour doesn’t have to mean that you are a curtain twitcher, looking out for any signs of movement and keeping notes of who is coming and going from all houses. That said, it’s good to be aware of what's happening around you and to remain vigilant.

Being a good neighbour also means that you should have a certain degree of tolerance – we are all different and people do like to let off steam in their own home. If you’re tolerant of your neighbours occasional transgression, such as un-mowed lawn, a loud party or car alarm, they will hopefully return the favour.

1.You Haven’t Seen Your Elderly Neighbour for a Few Days. What Do You Do?

Obviously, a good neighbour would care enough just to check that everything is OK. Most elderly people living in their own homes do tend to be fiercely independent, but while they may not appreciate interference, there may be a time when they need help. Don’t assume that they will have someone to take care of them – many people really are alone and would appreciate a helping hand, even if they are too proud to ask. Being a good neighbour means Looking Out For Your Elderly Neighbours.

2.You’ve Heard some Really Juicy Gossip About the Family Across the Way, What Are You Going to Do With That Information?

Tempting as it is, gossiping isn’t nice, and nobody likes a gossip. You’ll get a name for yourself if you start to spread misinformation about other people, too. It’s easy to say you’ll only tell a couple of people, but then they will ‘just tell a few people’ too and, before you know it, you’re responsible for everyone in the street knowing the gossip – even if you haven't told them all directly. Best to keep these things to yourself – after all, it could be you next time.

3.You’re going on holiday for two weeks, and you’ve got a house security system set up just in case. What happens if the alarm goes off?

Car and burglar alarms are the bane of a quiet life for many people, and if you’re away for a long period of time it’s a good idea to make sure that yours don’t cause any more stress for your neighbours than strictly necessary. If possible, let someone close by have the key and any codes to switch the alarm off in case of a false alarm - your neighbours will thank you for it!

Looking Out for Elderly Neighbours
Share Your Story, Join the Discussion or Seek Advice..
I'm sorry to hear you have a neighbour from hell but persist when the noise starts make a note when you have gathered reasonable information send a copy to your local council. If you have to ring non emergency police as often as possible to get crime numbers to support your problem. It took me 8 months and alot of persisting but I finally got rid of my neighbours from hell you do not deserve to be stressed or scared in your own home. He sounds like a menace
samfoxy91 - 6-Feb-15 @ 11:00 PM
My next door neighbour,who is known to harass people for the fun of it,loves to party,likes the weed,and loves an audience,has accused the 80 year old woman,and her daughter,of staring in His windows,so he put a 6 ft fence up,now they're scared to go into their back garden. As for my wife n me,he likes to bang on our side door at 2 am,3 am,when he comes home from Partying,with his wife? We are in our 70's.Sunday morning it was 6 am.he thumped our door twice,so hard the house rattled. So being sick to the back teeth with it,I phoned their landlord,who told me to phone the police Next time,and keep a diary,time,what was done. We're not looking forward to new year,no doubt he'll call me out to fight again,as he did last year when I was trying to have my dad's body removed from the care home,cos he'd just died. Beleive me I felt like knocking hell out of him,but for the wife who stopped me.
Big harry - 15-Dec-14 @ 8:39 PM
Title:
(never shown)
Firstname:
(never shown)
Surname:
(never shown)
Email:
(never shown)
Nickname:
(shown)
Comment:
Validate: