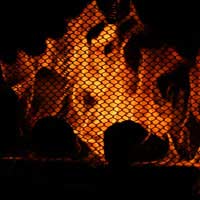 Many people in the UK have wood-burning stoves. Some houses need these for heat, whilst others use them as a decorative room feature. However the problem with wood burning stoves and chimineas is that they give off smoke as they burn.

Under the Clear Air Act of 1993 (consolidating the 1956 and 1968 Acts designed to deal with smog), local authorities can designate some areas of their region to be a 'smoke control area'. In these areas, it is an offence to emit smoke from a chimney, a furnace or any fixed boiler. It is also an offence to acquire 'unauthorised fuel' for use in a 'smoke control area'.
Are there any laws about what is burnt in a chimnea? Our neighbour seems to burn any wood that comes to hand which at times causes copious amounts of smoke, preventing my family enjoying our garden and forcing us to close our windows.

The maximum punishment for each offence is a £1000 fine. Your Local Authority will be able to advise of any 'smoke control areas' in your local region. You can find numbers to contact your local authority.

What About Other Relevant Legal Requirements?

There are legal requirements about the design specification and installation of wood burning appliances. This is to ensure that these are correctly ventilated to allow fuel to burn cleanly, and ensure that appliances do not release dangerous carbon monoxide or carbon dioxide into people's homes.

Clearly, smoke blowing into your garden or house is "a nuisance", and can affect your enjoyment of your property, especially if this prevents you sitting in your garden, or opening windows. However this may also be a legal 'nuisance'.

Legally, the term nuisance refers to a legal tort, or civil wrong. It is used to describe:

You have a right to quiet enjoyment of your property. This is the same right that stops your landlord carrying out weekly inspections of their property. A legal nuisance is an act that interferes with this right (such as forcing you to close your windows or preventing you sitting in the garden). This type of nuisance is often referred to as a private nuisance.

The case of Bamford v Turnley defined private nuisance as:

"any continuous activity or state of affairs causing a substantial and unreasonable interference with a claimant's land or his use and enjoyment of that land".

I live in a UK city which has seen a great increase in the use of not only wood burning stoves but also the use of smokeless fuel. Being surrounded by 3 houses in a built up area that regularly pump out smoke and fumes, it is not a comfortable or healthy environment.

As far as I can see none of these activities tick the environmental box or consider the health implications. Do we have a legitimate cause for action?

Whether any activity constitutes a nuisance will depend on how it affects you, and the reasonableness of the activity. This will include considerations such as the time of day the activity is carried out (for example DIY is a reasonable activity, but not if it involves hammering after midnight every night).

The court will also consider the area that you live in. For example a built up area can be expected to be noisier than a rural area. The case of Cambridge Water Co Ltd v Eastern Counties Leather Plc stated that if a defendant was using their land unreasonably and causing a nuisance, they will still be liable, even if they used reasonable care to avoid doing so. The test is really if the action was unreasonable, and if the resulting nuisance was reasonably foreseeable.

It is a defence to a nuisance claim that if a private nuisance has continued for 20 years, it becomes legal. If you have been aware of a continuous nuisance caused by your neighbour for over 20 years, you will not therefore have a claim in nuisance.

However if you moved into your Property after your neighbour was already burning wood, and so committing the nuisance, this will not be a defence according to the courts. (The 1879 case of Sturges v Bridgman states that there is no defence that the Claimant came to the nuisance).

If a court finds that a neighbour has committed a private nuisance, they can:

Often a private nuisance will also be an environmental nuisance (for example light pollution). You can therefore ask your Local Environmental Health Officer to attend your property and report on the conditions. This will be useful evidence in your case.

Options to Prevent a Nuisance

We have a neighbour who has a wood burning stove that frequently floods our house with fumes. Having spoken to the Local Environmental officer we are assured that the appliance conforms to the legal requirements and therefore our only redress is a civil case. As we do not have the funds to do this can you suggest an alternative?

Depending on the nuisance being caused, you may have several options to take private action. These may include:

You may also apply to the Magistrates Court if, though a nuisance has currently stopped, it is likely to reoccur on the same premises.

Of course the easiest and cheapest way to address a nuisance is to speak to your neighbours. Do they realise that the smoke from their fire is blowing into your house or preventing you using your garden? Particularly in the case of outdoor fires, it may be that these could be moved to a different side of their property to prevent this problem.

Taking Your Case to Court

If you wish to take your case to court, you can get free legal advice on this from your local Citizens Advice Bureau (www.citizensadvice.org.uk/index/getadvice.htm). Unfortunately free legal advice is not available through the Legal Aid scheme for this type of legal proceeding. Here are a few keys points to consider:

What evidence will you need to take your case to court?

There are no rules about what evidence you will need in court; you simply need enough evidence to prove your case. Try to make sure that for every point you make, you can back up what you are saying with evidence; it is up to you prove your case on the balance of probabilities. Any evidence you wish to rely on must however be relevant, and go to proving / disproving an element of nuisance (not simply showing that your neighbour is annoying in some other manner).

Here are a few different types of evidence you may want to obtain to support your case:

2) Damaged items - if sooty smoke / ash is blowing into your house / garden, put items (e.g. teddy bears) in a plastic bag as evidence that soot is damaging your property.

3) Witness statements - as well as you giving evidence, you could ask other neighbours / friends to visit your Property and witness the problem themselves. Your witnesses must have witnessed the problem themselves however; they cannot simply give evidence that you told them there was a problem, as this is classed as 'hearsay' by the courts and won't be allowed.

4) Reports by an Environmental Health Officer (EHO) - if an EHO has visited your Property you may rely on their report or test readings. However if the report indicates a nuisance to the public at large, often the EHO will take on the case against the offending party themselves.

Note that any evidence that you wish to rely on will have to be disclosed to the other party if you take your case to court. You will therefore have to provide your neighbour with copy statements and photographs.