Bonfire Nuisance in Your Neighbourhood 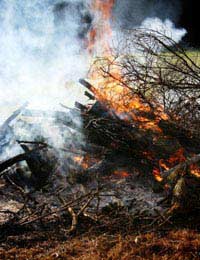 If the type of domestic property you live in is suitable, it is perfectly legal to have a bonfire on your land and, contrary to popular belief, there are no restrictions as to what time of the day or day of the week you can have it on. There is, however, firm legislation in place which you must comply with to ensure that your bonfire does not contravene the Environmental Protection Act.

In addition to the legislation, it’s also important that you consider how the bonfire might affect your neighbours. While the law does not restrict you from doing so, it would be highly inconsiderate to light a bonfire in the middle of the night. As a general guideline, don’t light your bonfire any later than one hour before dusk, and if possible do it in the morning or early evening.

You need to think carefully about where in your garden you're going to place your bonfire. Not only do you need to consider your neighbours, but any kind of fire can be extremely dangerous if not managed properly. Keep any bonfire well out of the way of windows, trees, fences, hedges and other combustible materials.

Even in the summer months, when there are lots of green leaves around, it’s easy to forget that they are simply light covering for a lot of dry wood and, should an ivy bush catch fire, for example, one that grows along the side of a fence reaching right to your house, it’s amazing how rapidly that can take hold and spread.

It’s common courtesy to let those neighbours who might be affected by the smoke know when you intend to have the bonfire. Obviously, not everybody has the same day for doing their washing and hanging it out on the line or inviting guests around for a barbecue, but by letting them know in advance, your neighbours can plan washing days and outdoor activities accordingly.

While on the subject of barbecues or using other smoke-causing devices such as a Wood Burning Stove, the same common courtesy rules should apply if you think you are going to cause excessive smoke problems.

First, try to have as few bonfires as possible. These days, and with the encouragement to recycle, there is far less need to burn garden rubbish than there may have been a few years ago. Recycling bins are often provided for garden waste and many gardeners will use much of the stuff that they may have previously burned and use it as compost.

Don’t include any wet or green materials on your bonfire as that will just cause excess smoke. For safety purposes and to reduce annoyance potential, it's best to burn a small bonfire and then adding to it as opposed to making one great big bonfire. Keep a hosepipe handy or have buckets of water already prepared in case the fire gets out of control, and never leave a bonfire unattended.

You should not burn anything which is likely to cause excessive and pungent black smoke. For example, rubber tyres and plastic containers do not belong on a bonfire. You should not attempt to light a bonfire when it’s a windy day, as wind will blow the smoke further, causing annoyance to even more of your neighbours.

If a Neighbour’s Bonfire Causes a Problem

If a neighbour is burning a bonfire which is causing a nuisance, you should go round to their house and ask them politely to extinguish it or if they could do anything to reduce its effects. Quite often, they are so engrossed in what they’ve got to burn and get rid of that they can be pretty oblivious to the effects the bonfire is having on nearby residents.

However, if they ignore your request, you can contact your local authority’s environmental health department who will write to the neighbour, and include the relevant legislation about what they can and cannot do. Further legal action can be taken against them if they continue to flout the law. Keeping a written log of dates and times when the problems arise and taking some footage of the effects of a neighbour’s bonfire if you have a camera or, better still, a camcorder, will often help to enable your local authority to prosecute them more quickly if they are breaching the law.

Generally speaking, however, there are far fewer reasons for anybody to be having to burn rubbish on a bonfire in their garden these days. Waste can be often be recycled or disposed of in other ways so, if you are thinking of having a bonfire, consider the neighbours and think of less damaging ways in which you might be able to dispose of certain kinds of waste.