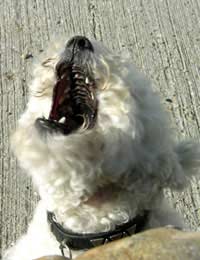 It’s important to realise that barking is a dog’s means of communication. You might be surprised to know that the vast majority of people will tolerate a dog’s barking up to a point. Not only do they understand that it’s completely natural for a dog to bark, but some people gain a sense of security in knowing that a particular dog might be trying to alert their owners (and consequently – the neighbours) to something that is out of the ordinary or potentially dangerous, such as an intruder may have entered the garden or back yard.

However, problems arise in a neighbourhood where a dog is either barking incessantly and/or the constant barking is causing a nuisance at inappropriate times of the day. This will usually be at night where the dog may be kept outside and you cannot get to sleep, or perhaps you have young children and they can’t get to sleep. The problem is what to do about it if you find yourself in this situation.

Basically you have 3 possible course of action:

Below is some good advice on how to proceed with each of the above options:

If a dog is constantly barking in your street and is causing a nuisance, there are laws to address this issue. However, few people take pleasure in upsetting their neighbours wherever possible and most would wish to take a ‘diplomatic’ approach to the problem first without Resorting To Legal Action.

The ways in which you could try to get a resolution to the problem might vary. It could all depend on how you feel about directly confronting a neighbour by knocking on their door and speaking to them about it. Others might feel that the neighbour in question might not be reasonable and that they could be hostile towards them. If you choose to speak directly to your neighbour, the best way to go about it would be to go round and see them and say that you’re just checking that everything is OK.

“I just popped round because your dog’s been barking for the last 2 hours and I thought there might be something wrong?”

In taking that approach, you’re avoiding direct confrontation which could irk a neighbour and cause them to become hostile towards you, while still getting your point across. On the other hand, if you’ve been down that road before and the problem persists, you might decide you want to tell the neighbour that you’re having difficulty getting to sleep as a direct result of the dog barking.

2. If that Doesn’t Work? Contact your Environmental Health Department

Dont' call the police or the RSPCA - If you need to take things further, don’t call the police or RSPCA, unless you have an otherwise valid reason to do so. Instead, get in touch with the Environment Health Department of your local authority.

They will investigate the matter and deal with it. Sometimes, even the owner of the dog might not be aware of the problem. For example, a dog might just persistently bark when the owner leaves the house and the dog cannot cope with being left on its own.

Initially, an environmental health officer will try to advise the dog owner of ways of overcoming the problem. The owner, for example, might be highly embarrassed about the problem themselves, yet have no idea how to resolve it, and the officer will be able to suggest methods for training the dog not to bark in an incessant manner.

However, if this doesn’t work, then it can lead to a Statutory Notice under the Environmental Protection Act 1990 being served upon the owner. This is a legal procedure which gives the owner around 21 days in which to resolve the issue. The Environmental Health Officer will do this on your behalf. If the problem hasn’t been resolved after that point, the owner can incur financial penalties and, as a last resort, the Act does have a provision whereby it can take away the dog from the owner.

In most cases, problem barking is caused by either neglect or, more commonly, because of insufficient training, so if you keep a dog yourself, be sure that it is trained properly in order not to become a nuisance. There is plenty of advice on the internet to help you with that, or you could get your dog enrolled in proper training and obedience classes.

Dangerous as Well as Noisy?

If you think your or your neighbours' dogs may be a danger to those in the vicinity, take a look at the 'Dangerous Dogs' feature.