What to do if Neighbours are Spreading Rumours About you 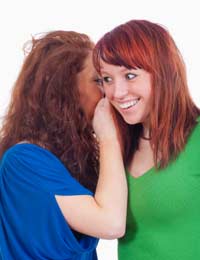 Unfortunately, we live in a world where gossip and rumour-mongering is prevalent throughout the whole of society. Often, it comes about as a result of the person who is spreading the rumours about you being very insecure, and may even be jealous or envious of you for whatever reason.

Try To Rise Above It

Firstly, although nobody enjoys being gossiped about, it’s important to realise that most gossip and any rumours that are spread about you will probably be pretty harmless. Wherever possible, you should try to keep a cool head and let it rise above you.

Much of the time, the person(s) who is spreading rumours are hoping that they can provoke you into some kind of retaliatory action so the more you can ignore them the better. Laugh things off if another neighbour approaches you with some gossip, and the likelihood is that they will lose interest, too. The rumour ‘spreader’ is more likely to start to feel that they're the one that other neighbours are starting to pity.

What if it Starts Becoming Malicious?

Although most gossip and rumours are pretty harmless, even if they can be a bit hurtful, sometimes they can start to get out of control and, before long, you can feel quite victimised, especially if the person spreading the rumours have been able to coerce other neighbours to ‘jump on board’. This can sometimes be very damaging to the mental health of the victim.

You might start feeling as though everyone is laughing at you or condemning you and this can lead to you feeling paranoid or suffer symptoms of anxiety and depression. If this happens, there is a real case of harassment taking place now and you are Protected By Law Against Harassment. You may wish to approach the police or, perhaps a better course of action would be to contact your local authority’s anti-social behaviour team, if they have one, and explain the issue to them.

Before considering taking any of the actions above, it may well be worth contacting the rumour monger first to discuss the situation. This doesn’t necessarily mean that you’ll end up becoming friends with them but sometimes rumours originate as a result of complete misunderstandings, so it might help to ask them why they have been spreading rumours about you and on what grounds are they basing their assumptions.

It’s also useful to tell the person how their actions have affected you, especially if there are no grounds for the rumours in the first place. Even if you don’t get the desired response, it may be worth asking your neighbour if they’d be prepared to Speak To A Mediator with you to help reach some kind of agreement.

Unless the rumours can be proven to constitute some kind of harassment, taking the person to court is fraught with danger. Firstly, you’ll need to be able to provide proof that their comments are slanderous and have caused defamation to your character, and that’s often quite difficult to prove. Also, not only will legal action be costly, a defamation lawsuit may not necessarily result in any restoration of your character, and may even damage your reputation further.

Therefore, simply ignoring or laughing off rumours are usually the best way to go about dealing with them and people will soon get bored. However, if they do start to cause you harassment and make you feel that you’re being wrongly persecuted, then the threat of involving the police or actually involving them is perfectly acceptable under laws to deal with harassment.