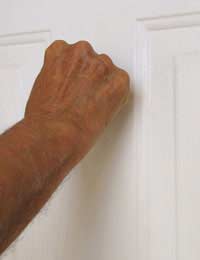 Noisy neighbours are a huge problem for many residents. Whether the noise is caused by people shouting, dogs barking, loud music, or even noisy sex, it can cause a real problem for neighbours left having to listen to it. Often neighbours simply haven't considered how noisy they are and the effect of that noise on others. Bringing this to their attention will usually resolve the issue. If you need to know more about noise legislation and your rights, we've posted links to our articles following our letter templates below.

So how do you go about discussing the problem with your neighbours?

Talk to your neighbour

Initially try just popping round for a quick chat to your neighbour. If they are never in when you go round, or you don't feel comfortable talking to them face to face, try sending an informal note. If this doesn't resolve the problem, then a more formal letter may be required.

To assist, a template informal note and more formal letter are below:

Informal Note to Neighbours About Noise

Just a quick note regarding the noise from your property. This can be quite clearly heard from inside my house and so prevents me from getting to sleep on an evening.

Please could you try to keep the noise down a little, particularly overnight?

Thanks for your help.

Formal Letter to Neighbour About Noise

Re: Noise from [neighbour's address]

I live at [address], next door. I am writing in relation to the noise from your property.The noise specifically is: [select appropriate]

You may have previously been unaware of this noise. However it affects me because it can be clearly heard in the habitable areas of my house [and prevents me from sleeping].

The Noise Act 1996 means that the local authority must take steps to investigate any complaints of noise at night time. I am however, keen to resolve this amicably and do not want to report this to the council at this stage; we are after all neighbours! I would therefore be grateful if you could try to reduce any noise between 11pm and 7am.

Thank you in advance for your cooperation.

[Your signature]
[Your name]

We have lots of useful feature, articles and responses to comments, which we hope will help you handle your own neighbour noise problems. Here are some of the articles you may find useful:
Your Rights Under the Noise Act
What Constitutes Noise Pollution?
The Noise and Nuisance Act
Next Page