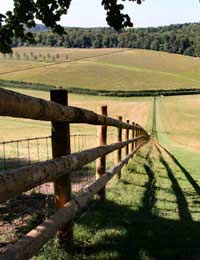 Adjoining neighbours can sometimes get into a dispute about the position and ownership of a particular boundary, be it a fence, wall, barrier or some other kind of boundary line. Often the Boundary Disputes will arise when one party wishes to use part of the land for something particular and the adjoining neighbour opposes that on the grounds that the other is encroaching upon their land.

Alternatively, arguments also arise where damage has been done to a particular fence or wall, for example, which then needs repair and the decision over who is going to foot the bill.

How to Establish the Boundary Lines

Usually, the most common way of establishing boundary lines is to check the deeds of the properties involved and, more often than not, there will be a clear demarcation of exactly where the boundaries are. However, this is not a foolproof method as previous owners of the houses concerned may have agreed to alter the boundaries for one reason or another yet have not informed the Land Registry.

Another point to consider is where one party has been using the disputed area of land continuously for the past 12 years. This is something that is termed as 'adverse possession'. It can be quite complex to understand and in this situation, it's better to seek legal advice if the dispute cannot be resolved amicably.

Establishing Boundary Areas Which Aren't on the Deeds

There are certain boundary areas that will not be included within the deeds, such as party walls, hedges and ditches and fences. Most of the time it's simply presumption that determines who owns what and whose responsibility it is to maintain certain boundaries or barriers.

If you wish to fix an exact boundary, you need to:

Ways to resolve your dispute

There are several ways in which you can attempt to resolve any issues you have over boundaries:Here's an overview of what's involved in each of the above:

Disputes over boundaries and your rights can run into several thousand pounds and even six figure sums in more complex cases should you decide to take the matter to court. This can cause immense stress.

The best way to resolve any boundary issues is to try to reach an agreement between both parties. Once an agreement is reached, you can inform the Land Registry of the agreement and fix the boundary. However this comes at a cost, and it may be that you and your neighbour can resolve the issue without needing to formally "fix" the boundary line.

In mediation, an independent person is jointly appointed by both parties to "police" discussions. It is very much up to the two sides to reach an agreement. Having someone to help ensure that discussion stays on relevant issues can help with this, but both parties need to approach the discussions with a genuine intent to resolve the matter and appreciate that this will involve some compromise on both sides.

This can be a great and comparatively cheap way to reach an agreement that all parties are happy with. Further, the Courts will often stay (put on hold) proceedings to give parties chance to try to reach a settlement via this method. However the "down side" of mediation is that either party can walk away at any point, and so there is no guarantee that the problem will be resolved.

Should you wish to undertake mediation, an RICS accredited mediator (who specialises in boundary disputes) can be found at http://www.ricsfirms.com/accreditations/mediationaccreditationscheme.

Adjudication involves both parties jointly appointing an independent expert who will decide the dispute for you. Both parties agree to be bound by the adjudicator's decision. Many barristers chambers offer this service.

The advantage of adjudication is that it is speedier than trying to resolve the matter via the courts, and a definite solution will be reached. Further parties will usually not be required to make an appearance in person.

The disadvantage is this can be a very expensive option, and in some cases can be more expensive than using the Court system. It can also create further dispute by parties failing to agree an adjudicator, and spending more time arguing over who will resolve the argument than actually working towards a resolution!

The Courts are of course available should parties be unable to resolve their dispute amicably. Sometimes this may be the best way of resolving your dispute. However I would advocate careful consideration of the following before applying to the Courts.

1. You will usually need to instruct a solicitor to guide you through the Court processes and assist you to best present your case. Solicitors range from approximately £120ph to over £200ph. You will need a number of hours to allow for consultation with your solicitor, receipt of advice, and preparation of your claim / defence with your solicitor.

2. If you are not successful, there is a risk that you may have to pay at least a portion of the other party's costs, as well as your own.

3. The Courts will usually expect you to have considered and attempted a form of alternative dispute resolution, such as mediation (as discussed above).

4. The Courts often have a several month backlog. When you will be able to have your case heard will depend upon your local court's timetable. However in large city centres, this could be as long as six months, particularly if you have a number of witnesses or a large amount of evidence to be considered.

What is the best way?

Before taking steps to try to determine a boundary, first consider why you need to determine the boundary. The above options have varying costs, however all do come at a cost, and it may actually be cheaper to for example jointly pay the cost of repairing a fence rather than spend money determining whose responsibility it is to do so, particularly if this is likely to be a one-off repair. Also remember that disputes with neighbours may have to be declared should you wish to sell your house, potentially making your property less attractive to buyers.