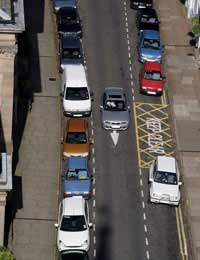 Many conflicts between neighbours arise as the result of disputes over parked cars. Of course, if you have a separate driveway then there isn’t a problem, as long as you actually park on it, but issues do arise when people park their cars on the road upon which they live.

Having off street parking not only increases the value of a property but it also reduce the risk of neighbour arguments over where to park the car. In some residential areas, often London, parking permits are charged at a premium rate and don't always resolve the parking problems, as residents think they have a right to park in front of their house since they have paid for a permit.

The Highway Code is there to explain and guide you through the rules and regulations set out in myriad pieces of traffic and road legislation.For example:

There are many more rules which you should read and be aware of before taking any action, you can find the full list at www.gov.uk

Many parking disputes arise over the failure to observe parking ‘etiquette’ on the street where you live. But etiquette and the law are two totally different issues, so let’s take a look at both.

What The Law Says

As long as your vehicle is taxed and you are not contravening any other traffic laws, you are allowed to park anywhere on a public highway (but not on footpaths/pavements) where it is legal to do so.

Parking Outside Your Own House

Etiquette, good manners and common sense are the main ingredients in avoiding parking disputes with your neighbours. Most people would choose to park outside their own home anyway because of the convenience, but what if you have more than one vehicle belonging to a single property and there are no driveways or you have a driveway but there is only enough room for one car?

No Automatic Right to Park Outside Your Home

Basically, it’s an unwritten ‘rule’ that people will generally tend to park outside their own home but it’s important to note that no one has an automatic right to do so. It’s not always possible and, in addition to residents, other road users also have the right to park outside your home providing they are not contravening the Highway Code.

To resolve this issue, the only thing you can do is to try to have a friendly word with your neighbour and explain to them why you’d prefer to park in front of your own house. You may find that they didn’t realise it bothered you and often simple courtesy and communicating your issue with your neighbour will resolve the problem.

If you share a driveway with your next door neighbour and a parking dispute occurs because of lack of space or one person’s vehicle is taking up more space, you can resolve this by checking your house deeds to find out where the boundaries lie.

Accessibility and Upkeep of a Shared Driveway

It’s courteous to share responsibilities for the accessibility and tidiness of a shared driveway. If you have children, make sure you keep any toys off the other person's part of the shared driveway. If your next door neighbour simply decides they’ve had enough and drives straight in and ‘accidentally’ runs over a children’s toy, you’ve no legal redress – it’s your neighbour’s part of the driveway and your responsibility to keep things that belong to you, on your side.

This is, by far, the single most frequent cause of annoyance and arguments between neighbours. Unfortunately though, the law does not help in this regard. It's common courtesy not to park directly in front of the driveway of another person’s property. After all, they may need to get in or out of the driveway with their vehicle. If you’ve blocked the access by parking directly in front of it, this will cause the vast majority, if not everybody, to become annoyed and to try to locate the owner of the vehicle to get them to move it. Therefore, most neighbourly people will never park directly in front of someone’s driveway.

What is the Relevant Law on Blocking Someone's Driveway?

The Highway Code, paragraph 207, asks that people DO NOT park their vehicle where it might cause an obstruction to other pedestrians or road users, and cites the example of not parking in front of another person’s driveway.

In essence, while there are certain rules and regulations under the Highway Code relating to parking on public highways, mostly it’s a matter of common decency and courtesy. Speaking calmly to neighbours and explaining reasons why you might need to park here or there, if practical, will usually result in you getting what you want. Just remember, however, that unless they are breaking the law, people are entitled to park anywhere they want to on a public highway providing they aren’t in breach of the Highway Code. If things get really bad, you could try and get a third party involved to mediate...take a look at our feature When Mediation Can Help Neighbour disputes for more information and advice.

If you have a dropped kerb at the end of your driveway (which in most local authorities - planning laws say that you should), the Traffic Management Act 2004 might help you. This act covers restrictions on parking where a kerb has been dropped for a number of reasons including for the purpose of "assisting vehicles entering or leaving the carriageway across the footway, cycle track or verge". There are exceptions to this including:

If you think you could have a case under this piece of legislation, first try to find and speak to the vehicle owner. In a friendly and polite manner, tell them about the act and that you'd like to get your vehicle out. If they refuse, call the police on 101 - not 999 (it's more than likely NOT an emergency and if it is, the vehicle owner will probably cooperate with you anyhow). Tell them about the problem, how long the vehicle has been there and that you need to get your car out. If they say there's nothing they can do, ask them about the Traffic Management act of 2004 (referring to dropped kerbs) and what they normal steps are. They should be able to help you to take the right steps even if they won't do anything themselves immediately.