Plans to Speed Up Evictions for Problem Neighbour 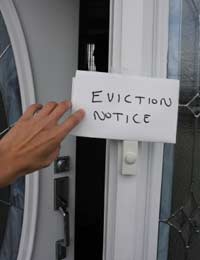 If you’re suffering badly from the curse of the neighbours from hell, you may be able to breathe a sigh of relief very soon, due to the prospect of new legislation that will enable beleaguered residents to get their stress-inducing neighbours evicted speedily for causing a real nuisance.

The process of getting a problem neighbour evicted has been painfully slow in the past, even when neighbours have been involved in really antisocial behaviour, and under new rules, certain ‘offences’ will automatically give the authorities greater powers to evict troublemakers, especially if the problem neighbours are indulging in illegal activities.

It’s been estimated that around 3000 tenants a year are subject to eviction proceedings because of their antisocial behaviour, but the process of actually evicting them is lengthy and can take up to seven months. This means that the behaviour carries on, making the lives of the other residents a misery and giving the troublemakers even more opportunity to wreak havoc.

Evicting problem tenants is also extremely expensive – in some complex cases ousting a 'neighbour from hell' can cost in excess of £20,000.

As recently as July 2011, it was reported that an Oxford family had finally been evicted following two whole years of complaints from their neighbours about their swearing, loud music, fighting and even allegations about prostitution. In Peterborough an elderly woman claimed that she had become a prisoner in her own home for ten months after a new neighbour moved in and began a hate campaign against her.

What Are the Plans?

Housing minister Grant Shapps announced at the beginning of August 2011 that he planned to dramatically speed up court processes – some of which have been known to take over a year. To counteract this, he plans to introduce new mandatory possession powers which will allow any past convictions that a problem tenant has for serious anti-social behaviour to trigger off eviction proceedings. This should mean that the process of evicting antisocial neighbours will be sped up and give the rest of the neighbourhood a break from their antics.

Some of the offences which are likely to trigger eviction proceedings are:

Some of the powers being brought in to make life more bearable for residents, councils and housing associations include mandatory grounds for possession in cases of people who have an established track record of antisocial behaviour.

These specific types of anti-social behaviour order will also be recognised in both criminal and civil courts, which will cut out the need for two sets of legal proceedings against troublesome tenants who have been indulging in criminal behaviour.

Why are The Government Taking Action Now?

The government have realised the misery that can be caused to law-abiding and considerate tenants just through the actions of an antisocial few, and have decided to level up the playing field and stop taking the rights of the people causing the problems more seriously than those who blatantly abuse their neighbours.

It’s been decided that in extreme cases, faster action is needed to avoid situations where an entire neighbourhood becomes a no-go area, and the area goes downhill, just because of the actions of one family or even one tenant.

Ministers are also keen to introduce probationary tenancies that will last for up to a year, enabling local authorities and housing associations to throw out problem tenants easily if they don’t behave properly and respect their neighbours.

Neighbours From Hell in Britain

The moves have been welcomed by pressure group Neighbours From Hell in Britain, who champion the rights of residents blighted with problem neighbours. The group said that its members had been overwhelmingly supportive of any changes in the law which gave the police, councils and courts the powers to act swiftly.

A spokesperson for the group said that individuals who were, or had been, living with problem neighbours agreed that the current legal process in place to deal with a neighbour from hell takes far too long. He added that the process didn’t support the 'victim' of the behaviour. A survey of 1000 victims revealed that half didn’t actually believe that antisocial behaviour orders made a difference, and said that noisy neighbours were the biggest problem.

A government consultation, ‘A new mandatory power of possession for anti-social behaviour’ is available online on the Communities and local Government website. The deadline for responses to the consultation is 5pm on Thursday 27 October 2011.