Home > Ask Our Experts > What Can we do About our Neighbour's Noisy Dogs?

What Can we do About our Neighbour's Noisy Dogs? 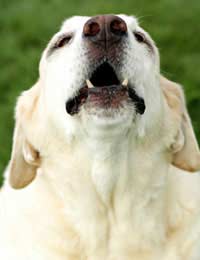 Q.Since our neighbours moved in around 9 months ago we have had constant issues with their dogs continuely barking day and night. They live in a small two bedroom house with a tiny garden and the dogs are labradors.

Their barks are really deep and loud and can be heard easily in our house. Whenever they go out the dogs bark non-top for hours, keeping our one-year-old awake. When they go into the garden it is horrible and they go mad if they hear us at all. What can we do?
(Mr Paul Fairless, 22 September 2008)

Persistent dog barking is not acceptable by law but before you take any formal action, it might be worth visiting your neighbours first and explain the situation to them as they may not be aware that there is a problem.

It can be a nightmare to live next door to a dog that is Barking Persistently, but the good news is that there is usually a reason for this behaviour. If both of your neighbours are out at work all day, the dogs are likely to be barking because they feel lonely and/or bored.

There could be other explanations, too. For example, they could be neglected and have medical problems, or they might simply be defending their territory. Alternatively, the owners may simply not know how to train them or they haven’t even bothered to try. Whatever the reasons, it’s not acceptable so if the barking continues after you’ve spoken to your neighbours, then you should contact your local authority’s dog warden service.

Once you’ve explained the situation, you’ll usually be given a record sheet to complete in which you’ll be asked to rate the level of noise, the exact time(s) it occurs most often, for how long it persists and how it affects you and your family. If the dog warden then decides to investigate, they may want to come and install sound monitoring equipment in your home.

If that happens, and the results indicate that the law is being broken, then the dog warden is likely to pay a visit to your neighbours. Initially, this may be done with a view to informing them that there is a problem and also to check on the welfare of the dogs in question.

Issues such as the suitability of the property to keep two Labradors may also be discussed and, at this stage, they may offer training advice to the owners. However, if the noise persists after the owners have been given a deadline by which to resolve the problem, then the local authority can issue an Abatement Notice. Then, if the barking does not stop, the owner could very well be taken to court.

However, there is also the chance that your local authority might deem the barking not to be a statutory Noise Nuisance. In that event, they should be able to provide you with an information pack should you decide that you want to take the case to the Magistrate’s Court yourself.