Home > Be a Good Neighbour > Getting to Know Your Neighbours 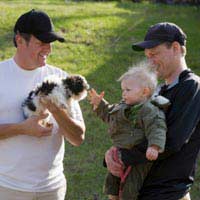 It can be really hard when you move into a new area, especially if it’s a community where everyone knows everyone else – although to be fair these sorts of communities are few and far between in modern Britain.

Making new friends can be difficult if you’re not very confident, and breaking the ice with a whole group of strangers can feel like a daunting task. But there are plenty of easy ways to connect with new neighbours and get to know the people you’re going to be living closely with.

Get to know New Neighbours with a Housewarming Party

Organising a small gathering can be a great ice-breaker. Why not make it a housewarming and ‘getting to know you’ party. Pop round to immediate neighbours and tell them you’ll be having a bit of a get-together and invite them along. That way you’ll avoid the ‘noisy neighbour’ label and hopefully prove that you and your family are approachable and friendly. Hopefully a few of the neighbours will attend, even just to get a nose around the house and find out a little about you, and the people you do meet will hopefully become friends over time. If a new neighbour has just moved in next door to you, there are many ways that you can Make Them Feel Welcome, too.

If you’re not much of a party person, why not invite them over for a coffee or a glass of wine one evening when you see your next door neighbours in the street. It can be daunting to introduce yourself, but once you get over the initial shyness, you’ll find that most people appreciate a simple ‘pop in for a cuppa’ invite. Doing this will give you a good opportunity to find out a bit more about mutual neighbours and the area you live in, and help you to Create A Friendlier Neighbourhood.

If you see a neighbour out in their garden, ask them if they need a hand. You could also offer to help them take their groceries in if you see them struggling home with armfuls of shopping. If you have noticed elderly neighbours, why not pop over and introduce yourself, offer to give them a hand with anything in the house or garden that they can’t manage, or pick up prescriptions and groceries for them on your way out.

Make a Good Impression on your New Neighbours

New neighbours want to know that you’re going to fit in and do your bit to support the community. So make sure you keep the garden tidy, keep the kids under control, don’t fall out with the neighbours over whose parking space is whose, and try to be as approachable as you can when you see neighbours in the street. Keep your noise levels down and don’t have people over making a mess or causing a nuisance.

Speak to neighbours about what’s going on locally. If there’s a local fete, it doesn’t hurt to join in, bake a cake or just generally be seen at these events. Carnivals, charity sales, anything that the locals are involved in, make sure that you’re there and show your face.

If you have children, they can be a great ice-breaker. Get to know the other local parents and offer to mind the kids or keep an eye on them. Join in the school run; find out where the local guides, scouts and girls' and boys' brigade groups are held.Find out if there’s a local Neighbourhood Watch Scheme and join this. Even if you don’t go to every meeting it will establish you as one of the people who can be trusted, and you’ll soon become one of the locals instead of ‘the new family at number ten’.

Looking Out for Elderly Neighbours

Making New Neighbours Feel Welcome
Share Your Story, Join the Discussion or Seek Advice..
We have lived in a small street in a semidetached house in our town for 32 years and everyone is very friendly polite and considerate as regards parking which sometimes is at a premium! A new neighbour has moved in a detached house with a drive for 2 cars. He's on his own and owns 1 Range Rover and 1 massive American truck which he chooses to park (both) on the street, half on the pavement,but never outside his own house, always outside other people's blocking the pavement and their light, and always on the other side of the street, even when there is room on his side. Many of us have asked him politely many times to try and park his vehicles in his drive or outside his own house (the truck doesn't go anywhere, it is stationary all the time!). He's the only one in the street to have a drive where he can park at least one of his vehicles. He has been rude and dismissive to these requests and we don't know how to deal with the problem. I'm aware We do not own the space on the street but in all the time we have been in this friendly street, everyone has been sensitive and considerate about each other. This man is really obnoxious and we feel that he's now doing it deliberately to annoy us. What recourse have we got?
Aimache - 13-Sep-16 @ 12:06 PM
We have been 40 years in our present home and 18 months ago when our long-term next door neighbours (property professionals) decided to move, we took the opportunity to incorporate certain long existing boundaries and to update our deeds using solicitors - which we did also 18 months ago. New neighbours have recently moved in beside us and they are claiming ownership of the land that is covered by our deeds - making threats etc - even though we have given them a copy of our deeds. My questions are, when do deeds come into operation: Immediately? Or after a period of time? Also are deeds the last word in ownership or is there something else we should have done, like fencing the relevant land, which wouldn't have been too difficult in retrospect. So far we have been very friendly and simply requested that the new peoplekeep off and desist from tampering with our hedge/chain link fence that the new land protects. We hope this will be enough because at our age we do not want to suffer an extended campaign. Many thanks BobbyP
BobbyP - 26-Nov-15 @ 8:44 PM
Title:
(never shown)
Firstname:
(never shown)
Surname:
(never shown)
Email:
(never shown)
Nickname:
(shown)
Comment:
Validate: